Have a Festive St. Paddy’s Day with Guinness and Irish Whiskey Imports

With the Feast of St. Patrick fast approaching, we thought we’d get into the green spirit and offer a selection of beers and whiskeys that don’t normally grace our shelves. Perfect for celebrating and imbibing responsibly, these special-ordered bottles and cans can be found in our San Francisco store. Because on St. Patrick’s Day, everyone’s Irish!

For the first time we’re offering Connemara, a peated single malt Irish whiskey from Kilbeggan Distilling Company. Connemara is rare among Irish whiskeys in that it offers a smokiness usually associated with scotch. This is imparted into the whiskey through the use of peaty malt to fuel the fire through the stills, and the result is a subtle smoky flavor that complements the whiskey’s light honey, pear, and spice tones. 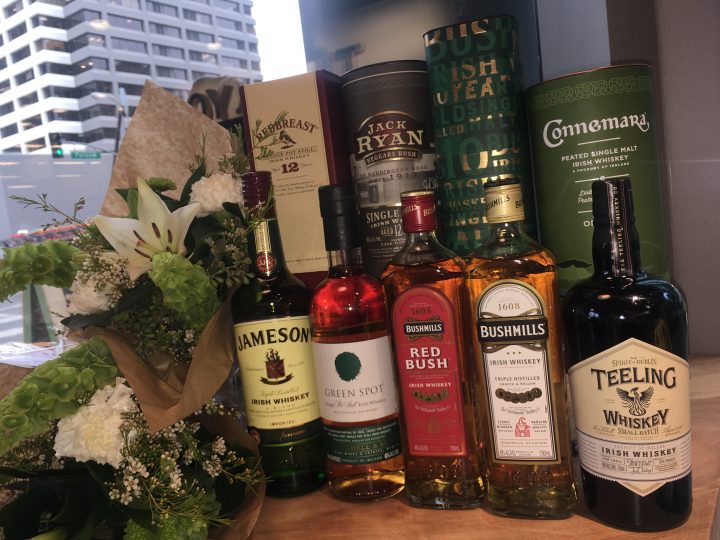 Teeling whiskey is finished in rum casks, which imparts it a spicy, vanilla-like, bourbon-ish flavor. The small-batch blend features a very high malt content, and as a result tastes sweeter than a traditional Irish whiskey. But it is balanced and cut by a pepper spice note. Teeling Whiskey Company was founded in Dublin by Jack Teeling, the son of John Teeling, the man who revitalized the independent production of whiskey in Ireland with the founding of Cooley Distillery in 1987.

Jack Ryan 12 Year is a single malt also produced by Teeling. It is distilled and matured in bourbon barrels to offer all the classic features of Irish whiskey: it offers vanilla, honey and oak notes, and is highly drinkable, considering its 46% ABV is a bit stronger than usual.

Green Spot is a single pot still Irish whiskey from Mitchell & Sons, an independent Irish wine merchant. We’re lucky to have it, as until recently it was only sold in Ireland. This amazingly light, clean whiskey features complex notes of green apple and cinnamon with a warm vanilla finish and is a critic’s favorite due to its incredible smoothness.

Another single pot still we have in stock is Redbreast 12 Year, which many consider to be the cream of the crop of Irish whiskeys. Redbreast is one of the most popular whiskeys of its kind due to its rich, nutty, and complex flavor and creamy mouthfeel, and it’s easy to understand why after tasting this beautifully balanced whiskey.

If you’re a bourbon fan and are new to Irish whiskey, there are worse places to start than Bushmills Red Bush, a new blend launched by the distillery last year that is aged in bourbon barrels and is a good introduction to the Irish whiskey category due to a rich, oaked wood sweetness and affordable price. 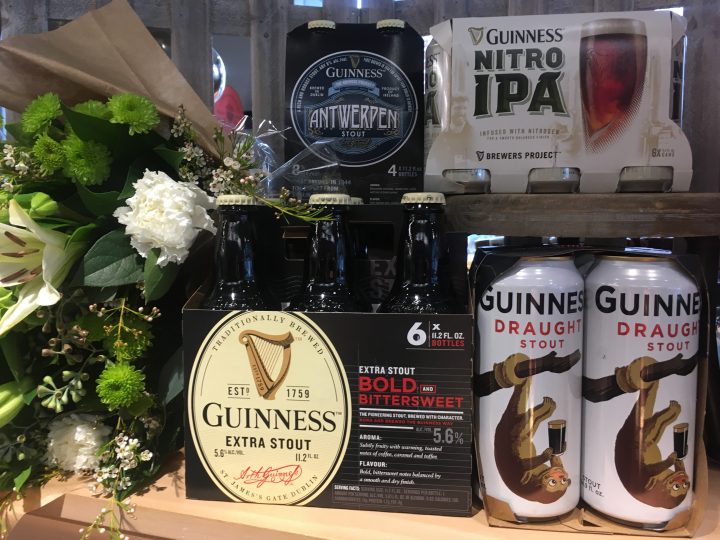 Nothing says St. Paddy’s day like a tall creamy pint of Guinness, and we’ve got plenty of the classic stout in stock in nitro cans, as well as a few other Guinness brands you’ve probably never heard of.

Aside from the classic Guinness Dry Stout, we’re offering Guinness Extra Stout, which is richer, thicker, and stronger than regular Guinness at 5.6% ABV, but still retains that roasty, smooth flavor that you associate with Guinness.

A new oddity that is surely a sign of the times is Guinness Nitro IPA. This beer is an Irish take on the IPA, which means it’s smooth and not bitter at all—with only 44 IBU, this would hardly be considered an IPA in American terms. In the UK tradition, this may be the malt-iest IPA you’ve ever tasted. The lack of CO2 and the presence of nitro also smooths this out considerably.

Antwerpen Stout is a beer that Guinness has brewed since 1944 for exclusive export to Belgium and has recently been rebranded and shipped to the U.S. as Antwerpen Stout. At 8% ABV, it’s very thick and roasty, more like a porter than a stout. This is an intense, creamy beer with smoked wood and dark chocolate notes and a very long finish, and certainly worth a taste if you’re only familiar with Guinness’s lighter Dry Stout.

About the Author: Woodlands Market